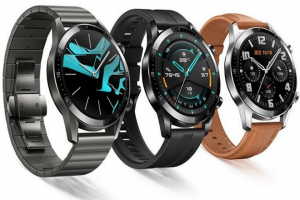 The company will sell the watch across platforms like Flipkart, Amazon, Croma and offline stores. It will make the 46mm variants go on sale on 19th December. The availability of the 42mm variant will be announced later by the company. This smartwatch is the successor of the Huawei Watch GT smartwatch which was launched earlier this year.

The company says that if customers book the watch from midnight onwards between 12th December and 18th December, they will get a Huawei Freelace worth Rs 6,999 free. This will be possible only if the customer makes full payment at the time of booking the watch. Huawei will also give the opportunity to the users who buy the watch between 19th December and 31st December to win a Huawei Minispeaker worth Rs 2,999 for free.

The watch comes with 5ATM certification ( it is waterproof up to a depth of 50 meters) as per the company. It features sensors like accelerometer sensor, gyroscope sensor, geomagnetic sensor, optical heart rate sensor, ambient light sensor, air pressure sensor and capacitive sensor.