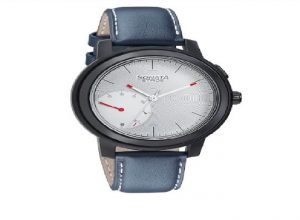 Sonata has announced that it has entered the Smart Wearables category with a range of hybrid Smartwatches – Stride. Stride will be available in two versions, Stride and Stride Pro, starting from Rs. 2,995. The range has six variants that come with Smart capabilities of tracking steps, call alerts, finding the phone, activating the camera, etc.

“With Stride, Sonata builds upon its commitment of delivering tangible, relevant benefits to its customers, while democratising features and styles that are limited to a section of the market. Stride offers a slew of smart features at category-first price points, thereby making Smart accessible to everyone,” said Utkarsh Thakur, Marketing Head – Sonata.

He added, “Today, falling fitness levels are unavoidable owing to sedentary lifestyles. There’s a lot of inertia in starting our fitness journey due to many constraints. The solution – Everyday Fitness, which is to expend energy through the day to day activities like walking, cycling, gardening, etc. Stride helps to track these everyday activities in a seamless manner. This trendy smartwatch will help make conscious choices towards a healthy lifestyle.”

Compatible with Android Version 5.0 and above; iOS version 11 and above

The company claims that the users can track steps, calories burnt and the quality of sleep. In addition, Stride also has a sedentary alert feature, which reminds users to move, in case there’s a lack of activity for a certain period of time. The watch is supported by the Sonata Stride Mobile app which is compatible with Android Version 5.0 and above; iOS version 11 and above.

According to the International Data Corporation’s (IDC) Worldwide Quarterly Wearable Device Tracker, the Indian market for wearable devices grew 30.9 per cent Quarter-over-Quarter (QoQ) in the second quarter of CY2019 (2Q19) and 123.6 per cent when compared to the same quarter a year ago, reaching an all-time high of three million shipments in a single quarter. This has further cemented India’s position as the third-largest wearables market in the world after China and the USA.

One of the biggest reasons for increasing adoption of wearables is the increase in the number of users who are new to the wearables market. Other influences include improved sensor accuracy, advances in miniaturization and better user data protection, reported Gartner.

As per a recent report by Strategy Analytics, Apple watch dominated the market with 48 per cent global smartwatch market share, while Samsung held second place, followed by Fitbit clung. Apple shipped 6.8 million smartwatches worldwide in Q3 2019, rising an above-average 51 per cent from 4.5 million in Q3 2018.

Company including the likes of Gizmore, Motorola, Riversong and Vivo have entered this segment lately. Earlier this year, a report by Counterpoint research reported that foldable displays are also coming to smartwatches.

Sonata is an India based watch brand, from Titan Company Ltd., a TATA group company. The brand has an annual sales volume of over 5.5 million watches and is sold through a strong retail network of over 5,000 dealers across the country.

Alright, it's too much waiting, we know! All you have to do is check out our live feed at 4:00 PM today and catch the all-new and exciting collection in action. See you all soon. #SonataWatches #Watches #NewCollection #FitWithStride #Launch #Trendy #Stylish #Fashion #Watch pic.twitter.com/1cuO0Et5wU