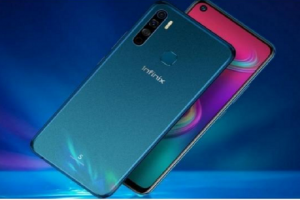 The Infinix S5 Lite smartphone which was launched last week in India for Rs 7,999 went on sale for the first time today on online platform Flipkart from 12 noon. Infinix had launched the phone in three colour options midnight black, quetzal cyan and violet.

The company says that the phone has a rear mounted fingerprint sensor and has face unlock feature. It is powered by octa-core MediaTek Helio P22 chipset along with IMG GE8320 650MHz GPU. The phone is backed up by 4GB of RAM and up to 64GB of internal storage. The memory can be further expanded up to 256GB via microSD card slot. The phone measures 164mm x 76mm x 7.9mm and weighs 178 grams.

Apple to Capture Top Spot in 5G Smartphones in 2020: Report