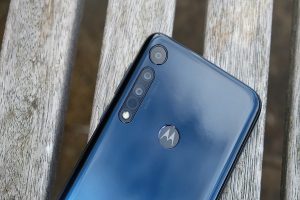 The Motorola Edge is loaded with a 6.67-inch Full HD+ curved waterfall display with a single punch-hole design. The screen will come with 19.5: aspect ratio along with 2340 x 1080 pixel resolution. The company also claims that the display will support 90Hz refresh rate and users will have an option to choose between 60Hz, 90Hz and Auto.

The smartphone will be powered by a Qualcomm Snapdragon 765 5G processor. The device will be backed by a 6GB of RAM and 128GB of internal storage. The camera front, the Motorola Edge will be loaded with a triple-camera setup with a combination of 64-megapixel primary lens, a 16-megapixel wide-angle lens and an 8-megapixel telephoto lens.

The phone is claiming to run on Android 10 and it will come with an under-display fingerprint sensor. The Motorola Edge will be loaded with a 4500mAh battery with no support wireless charging. It has also claimed to support 3.5mm audio jack, USB Type-C port, NFC, WiFi, Bluetooth, GPS and dual-SIM.

Moreover, the images reveal that the smartphone will come dual speakers for stereo sound. The top of the phone comes equipped with a hybrid SIM tray, meaning that one can either use one microSD and nanoSIM or two nano-SIMs at the same time.

Xiaomi Said to Have Filed a New Smart Speaker Patent in...

Huawei Drops Another Hint About Entering the TV Market?

Redmi May Launch These 5 Smartphones to Stay on Top in...