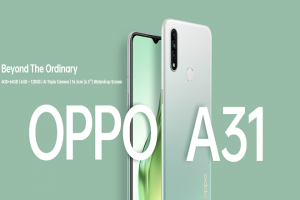 Oppo has launched A31 smartphone in India in two colour options of fantasy white and mystery black. However, the company has not revealed any information on its availability and pricing. Earlier this month, Oppo had launched this phone in Indonesia at a price of Rp 2,599,000 (approximately Rs 13,524). In India, the phone has been launched in 4GB with 6GB RAM and 64GB with 128GB of internal storage.

The phone comes with a triple-rear camera at the back. It includes a 12MP primary lens with f/1.8, a 2MP portrait lens with f/2.4 and a 2MP macro lens with f/2.4 aperture. At the front, the phone has an 8MP selfie sensor. The phone also has a rear-mounted fingerprint sensor that the company claims opens the device within 0.47 seconds. It also has other sensors like magnetic sensor, light sensor, proximity sensor, G-Sensor, gyroscope and pedometer. It runs on Android 9 based on ColorOS 6.1.

The Oppo A31 is powered by a 4,230 mAh battery which gives 45 hours of talk time, eight hours of video playback and 35 hours of audio playback as per the company. In terms of connectivity, it supports Dual Sim, GPS, A-GPS, Beidou, Glonass, Bluetooth 5.0 and WiFi 802.11 a/b/g/n/ac.