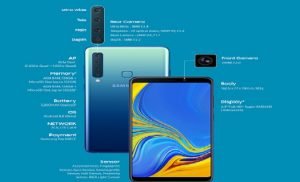 DJ Koh, president and CEO, IT and mobile communications division, Samsung Electronics said, “As a global leader in smartphone innovation, we understand the demand for meaningful innovation in a fast-paced world driven by visual communication. Building on our legacy in smartphone camera development we’re introducing next-generation technology across our entire Galaxy portfolio to give more consumers the opportunity to experience cutting-edge innovation. We’re excited to deliver on this promise and debut world leading smartphone camera technology with the Galaxy A9.”

Samsung claims that the 2X optical zoom camera in the 2018 A9 Pro will allow users to click perfect shots even from far distances. The depth lens camera as per the company allows shooters to manually set the depth of field for better looking pictures.

A press release issued by the smartphone maker says the AI scene recognition makes the quad camera setup smart and empowers it to adjust settings automatically depending upon the subject. The main camera boosts 24 megapixels and allows better photo clicking at any time of the ‘day’. Equipped with a 2.2GHz Quad + 1.8GHz Quad Octa Core processor, the latest addition in the Samsung smartphone family, the 2018 A9 Pro might just prove to be a great shooter.

The world’s first four rear cameras smartphone comes with a 3,800 mAh battery which might prove to be a downside, given its 6.3 inch amoled screen. Samsung A9 Pro (2018 version) comes installed with Android 8.0 Oreo, which again might not interest users, as Android’s latest version, 9.0 Pie, is already available in the market.

2018 Samsung A9 Pro pricing and variants

Consumers can choose between the Six GB, 128 GB and Eight GB, 128 GB models of the phone. Users can upgrade phone memory by up to 512 GBs using a micro SD card. The Samsung website shows pics of the 2018 A9 Pro in caviar black, bubble-gum pink and lemonade blue colours.

The pricing of new Samsung phone starts at EUR 599 which translates to roughly Rs 51,000. However, whether the 2018 A9 pro with four quad cameras will be available in India or not, has not been specified by the manufacturer. Samsung A9 pro 2017 was last available for Rs 31,000 in India.