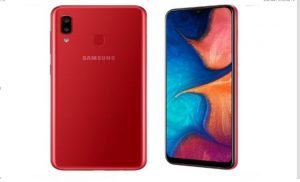 Samsung has announced the launch of A20 smartphone at an asking price of Rs 12,490 in India. At this price range, not only will the new offering compete against the likes of Redmi Note 7 series and Realme 3 smartphone but it will also be a competition to Samsung’s very own online only M Series in the country.

Xiaomi, as per a report by IDC, was the leading smartphone company in India during 2018. It held 28.9 per cent smartphone share and was the number one smartphone brand for six quarters consecutively.

Samsung, in what seemed like a move to re-gain its number step, has already announced the launch of M smartphone series. Currently, Samsung M Series is competing against the likes of Redmi Note 7 and Realme 3 smartphones in India. The pricing of the Samsung A 20 smartphone seems like Samsung’s another step aimed towards capturing the budget smartphone market in India.

The Korea-based electronics giant has launched the smartphone in Red, Blue, and Black color options. It features a 6.4-inch HD+ Super Amoled infiniti display. Samsung has equipped the smartphone with a 4000mAh battery. The screen of the smartphone offers a resolution of 720 x 1560 pixels. The company claims that the battery supports 15W fast charging.

Samsung Galaxy A20 is based on Android 9 Pie with the company’s One UI operating software. Connectivity options on this latest smartphone from Samsung include Wi-Fi, Dual 4G Volte and Bluetooth v5.0. Samsung A20 also supports GPS and GLONASS, and has a 3.5mm audio jack with support for FM Radio.