The likes of Oppo and Vivo have been offering pop-up selfie camera smartphones in the country. It is also believed that OnePlus 7 will also feature a pop-up camera design 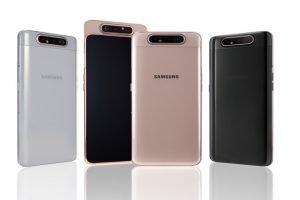 Samsung Electronics has revealed the new Galaxy A80 smartphone. This is the first smartphone from the Korea-based electronics company to come equipped with a rotating camera.

DJ Koh, President and CEO of IT & Mobile Communications Division at Samsung Electronics, said, “The Galaxy A Series provides a range of models so everyone can choose a device that fits their unique needs and enables them to pursue their passions. The Galaxy A80 offers premium features for digital natives who want to fully engage in the Era of Live.”

Samsung vs other brands

It is to be noted here that Samsung has been on an aggressive smartphone launching spree in the world. Apart from a whole lot of A Series smartphone devices, the company had recently launched M-Series smartphones in India also.

A recent report by IDC had said that Xiaomi had lead the Indian smartphone market for six consecutive quarters in the country. Another report by Counterpoint Research had pointed out that OnePlus, Samsung’s competitor in the premium smartphone race, was growing rapidly in India.

Counterpoint’s report read, “The success of OnePlus in India drove the overall premium smartphone shipments in the country to a record number in a single year. The brand is likely to grow as it broadens its reach in the European and US markets.”

Samsung A80 comes equipped with a 48 MP main camera and features a 6.7-inch FHD+ Super AMOLED screen. Samsung’s official statement read, “When users select the selfie mode in the camera app, the three cameras automatically pop-up from the back of the phone and rotate. The innovative camera mechanism delivers the same extraordinary triple camera experience with the same high-resolution lens, front and rear, so you never have to sacrifice on quality.’

The company has equipped it with a 3,700mAh battery and super-fast charging at 25W capabilities. Samsung’s statement regarding the A80 battery read, “The Galaxy A80 also features an intelligent battery which learns your daily routine and app usage patterns to optimize your phone’s power consumption. The Adaptive Power Saving Mode enables users to be reassured knowing the smart battery is running most efficiently for the best performance needed.”

Oppo Announces Different Online and Offline Offers For A9 and A5...