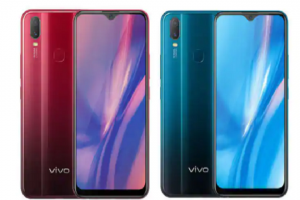 Vivo has Y11 smartphone in India. It was launched in Vietnam with Vivo Y19 in October. The same smartphone was launched way back in 2015. This is a refreshed version of the phone.

Vivo is selling the the 2019 version of the phone at Rs 8,990. It will go on sale from 21st December. The company will sell the phone through offline authorised Vivo retail stores. The phone will be available in coral red and jade green colours.

The phone is equipped with 3GB RAM with 32GB of internal storage. The memory can be expanded via microSD card. It has a dual camera- setup at the back. It includes a 13MP primary camera lens and a 2MP sensor for depth sensing. At the front, the phone has an 8MP camera.

The phone runs on Android 9 Pie-based FunTouch OS out-of-the-box. It is backed by a 5,000mAh battery with 10W fast charging technology support. It also has a rear-mounted fingerprint scanner. On the connectivity front, the phone supports VoLTE, Dual sim slot, WiFi, Bluetooth 5.0 and GPS with A-GPS.

Variant of U20 smartphone launched

Recently, Vivo had launched the new variant of U20 smartphone with 8GB of RAM and 128GB of internal storage in India. It has priced this variant of the phone at Rs 17,999 and is selling it through retail stores across the country.

Nokia Beats Samsung in Updating Security and Software of Smartphones