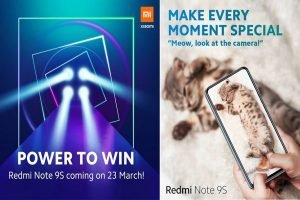 However, this is not the first time that Xiaomi has introduced a Note series phone with the ‘S’ letter. Last year, the Chinese company launched the Redmi Note 7S, which is said to be a better version of the Redmi Note 7 smartphone.

The Redmi Note 9S is expected to feature the latest Android OS, the Android 10 OS, just like most Xiaomi phones. The Redmi Note 9S will feature a punch-hole display design. The company might place the back-camera setup in a square shape module, as per the teasers.

The Redmi Note 9 Pro will retail at an MRP of 12,999 in India and the Note 9 Pro Max will retail at an MRP of 14,999. Both handsets ship with a quad rear camera setup, and a 6.67-inch display. The standard version will feature a 48-megapixel primary sensor, and the Max version will feature a 64-megapixel main camera. Moreover, both phones will sport the same 5,020mAh battery.

September 13, 2021
The Pure Sound 101 is available in Black color with a matt finish at INR 7,999 Consumer electronics maker Portronics has launched the ‘Pure Sound...