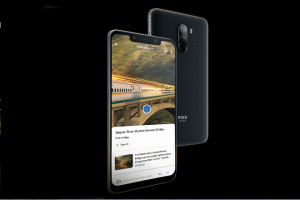 Xiaomi has launched the Android 10 OS update for the Poco F1 smartphone. The Chinese brand released the software update in January this year, and then pulled back due to several bugs. The company claims that the product will be receiving the Android 10 update via OTA. The update enhances the software version to the MIUI V11.0.6.0.QEJMIXM and brings Android 10 too.

The smartphone is currently selling at an MRP of 14,999. The Poco F1 was originally launched in India with Android 8.0 Oreo. However, the company claims that after downloading the update, users will witness slightly softer icons, new Mi Lan Pro system font, and improved always-on display functionality. Also, Xiaomi is claiming that the software update adds new animations, themes, wallpapers, improved notification system and also adds an Android security patch for the month of February.

A promise that we made is now fulfilled. The most awaited update for the #ChampionOfSpeed is finally here.#MIUIForPOCO V11.0.6.0 based on @Android 10 is released for #POCOF1.

RT to spread the word. pic.twitter.com/qWA9TROzCy

The Poco F1 is currently selling for Rs 14,999. The product arrived in India with Android 8.0 Oreo. The smartphone features a 4,000mAh battery with support for 18W fast charging (Quick Charge 3.0). Poco F1 is around 1.9GB in size and claims to offers some new MIUI 11 features too.

The Android 10 update for the Poco F1 is claiming to feature with a system-wide dark mode. The smartphone was launched in the year 2018. The device is powered by a Qualcomm Snapdragon 845 flagship SoC. The update will enhance the software version to the MIUI V11.0.6.0.QEJMIXM and also brings Android 10.

Vivo Launches U20 Smartphone in India