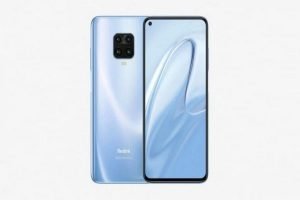 Powered by Qualcomm Snapdragon 720G mobile platform, Redmi Not 9 Pro Max comes Corning Gorilla 5 at the front as well as rear. A 6.67 inch IPS LCD display with 60 Hz refresh rate along with a touch sampling rate of 120 Hz, is what the device also boasts about. The company has launched three colour options to choose from : Interstellar Black, Glacier White and Aurora Blue.The phone also has a side-mounted fingerprint sensor and 3.5mm headphone jack.

There is 6GB or 8GB of DDR4X RAM and up to 128GB UFS 2.1 storage. The phone is also supported by a dedicated SD card slot. The chipset also brings NavIC support. Xiaomi revealed that it will prioritize Indian satellites for navigation.

The real difference between the two models lies in the main rear camera and the selfie camera. With 64-megapixel main camera, the latest smartphone is also paired with an 8-megapixel ultra wide-angle shooter, a 5-megapixel macro camera and a 2-megapixel depth sensor. At the front, Xiaomi has featured a 32-megapixel selfie camera, which is housed inside a punch-hole setup.