The smartphone was launched only about a month ago. It competes against the likes of Samsung M 30 in India 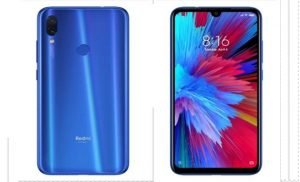 China based Xiaomi has started rolling out updates for the recently launched Note 7 Pro smartphone in India. These updates, include improvements in the camera capabilities, system optimisation and bug fixes.

It is to be noted here that Xiaomi had launched the smartphone in two variants in India. The company is retailing these through limited time sales in 4+64GB and 6+128GB variants in the country.

Xiaomi has also updated the lo light details visbility and image brightness in the smartphone. The other updates include improvements in auto white balance.

Both the variants of the Redmi Note 7 Pro smartphone come equipped with a 6.3-inch (16cm) FHD+ dot notch display that offers a resolution of 2340×1080 pixels. The smartphone also features a fingerprint sensor and has a Gyroscope, Accelerometer, Proximity sensor, Electronic compass, Fingerprint sensor, Ambient light sensor and Vibration motorIR blaster.

Acer Introduces its First AMD-based Chromebook in Partnership with Google