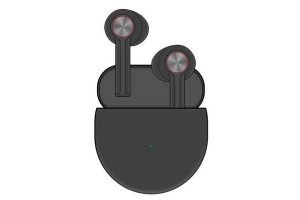 According to a source, the Chinese smartphone brand OnePlus be developing a pair of true wireless earbuds. However, a leak shows a pair of OnePlus Buds in black color, along with what looks like a curved, triangular case. The image comes via tipster Max J and provides what could be our first proper look at the black OnePlus Buds.

The in-ear design of the Bullets Wireless 2 implemented here also is great for passive noise cancellation, thanks to the tight seal formed by the tips. Whether the new OnePlus Buds will provide Active Noise Cancellation (ANC) too is still up in the air.

A recent clue to the upcoming OnePlus Buds, which could also be called the OnePlus Pods was also spotted in an OnePlus 8 Android 11 beta by XDA. The developers uncovered a string referring to OnePlus Pods in the Android 11 Beta 1 build. Previous leaks have already hinted at an Apple AirPods-like design.

Also, the report noted that this string was located in the new “Settings” APK present in the test build. Beyond the one reference in the Settings APK, the report also noted multiple references to “OnePlus Pods”.

App to control the OnePlus Pods

It also looks like the company is working on a dedicated app to control the OnePlus Pods. The report indicated that this app will come with “com.oneplus.twspods”. It is unclear if the company will release the app on Google Play Store or limited it to OxygenOS.

OnePlus could perhaps launch its true wireless earbuds with the launch of the upcoming OnePlus Nord / OnePlus Z phone. Irrespective of whether they are called the OnePlus Pods, OnePlus Buds, or whether they both end up being separate products, the TWS buds will be an interesting addition to the brand’s audio portfolio.