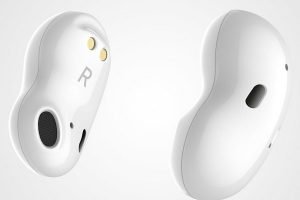 As the Galaxy Unpacked event has been confirmed on August 5, the South Korean tech giant Samsung is launching a quite a lot of products. According to reports, Samsung might be working on bean-shaped Samsung Galaxy Buds X soon. The leaks have shown the design of the product a head of launch. However, the pricing details and the channel for retail is not declared by the company yet.

The first leak shows the Samsung Galaxy Buds X in three color variants. Apart from the standard black and white variants, there is a third copper-like shade available for the earbuds. It is unclear if these will be the only colors in which the buds will launch. The Galaxy Buds X features a square-shaped case.

Earlier leaks and a recent FCC certification have also shown us a closer look at the buds themselves. The bean-shaped buds will go in your ear rather than hanging outside. The dimensions of the buds are 26 x 15 x 14 mm and they will weigh about 5 grams each. Rumors have also pointed at noise cancellation features and a rough price tag of about USD 140 (INR 10,450 approx.).