Sharp Aquos R2 Compact smartphone specs make it look like a competitor of smartphones falling under the Rs 15,000 to Rs 20,000 category in the country 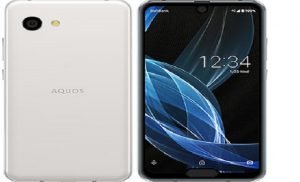 Japan based Sharp Mobile has unveiled the Sharp Aquos R2 Compact smartphone. The smartphone features two notches, a first in the world.

Famous for white goods in India, Sharp may launch smartphones under its brand name in the country in early 2020. Sharp Aquos R2 Compact smartphone is expected to hit the Japanese market in January 2020.

A report by eMarketer, an US-based market research firm, had recently said that the number of smartphone users in India is expected to reach 490.9 million by 2022. In comparison, there were only 291.6 million smartphone users in the country in 2017.

It was last year that Sharp had decided to re-enter Indian consumer market. Reliance Retail has the sole rights of selling Sharp televisions and home appliances including refrigerators, washing machines and ACs for three years in India.

Sharp, after a long time has started advertising for its white goods on the Indian media. It has even roped in cricketer Rohit Sharma as its brand ambassador for Sharp TVs. The sudden aggressive mode that Sharp has taken in the Indian electronics and consumer market is a clearly indicator that the Japanese manufacturer is not taking Indian market lightly at all.

The recent unveiling of the Sharp Aquos R2 Compact smartphone in Japan is special not because it’s the world first smartphone to sport two notches, but because the specs of the smartphone make it look like a competitor of smartphones falling under the Rs 15,000 to Rs 20,000 category in the country.

The company confirmed that Sharp Aquos R2 Compact smartphone will be available in green, white and black color variants. It sports a two notch design – an upper notch for selfie camera and a bottom notch for home button. A 5.2-inch IGZO full HD+ display offers a resolution of 2280 x 1080 pixel. Sharp is claiming a 120 Hz refresh rate on Sharp Aquos R2 Compact’s display.

Sharp has endowed the Aquos R2 Compact with a 22.6-megapixel camera with LED flash at the back and a 8-megapixel camera at the front. The smartphone comes with front-mounted fingerprint sensor and is powered by a 2,500 mAh battery with Quick Charge 3.0 support.

The company claims that Sharp Aquos R2 Compact is both water and dust resistant. The latest smartphone from Sharp comes pre-loaded with the company’s AI voice assistant – EMOPA.

OnePlus 8 to be Launched in the Second Week of April...