Facebook has already announced two AI powered video calling consumer devices, Portal and Portal Plus. The Facebook AR glasses may be the third hardware product by the social media giant 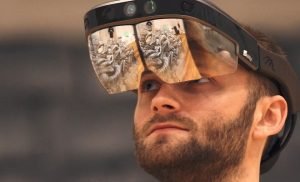 Days after launching its first range of Artificial Intelligence powered video calling hardware products, Portal and Portal Plus, Facebook has confirmed that it is working on building Augmented Reality (AR) glasses. Facebook AR Head Ficus Kirkpatrick confirmed about the development of Facebook AR glasses at a TechCrunch AR/VR event held in Los Angeles.

He told TechCrunch, “Yeah! Well of course we’re working on it. We are building hardware products. We’re going forward on this. We want to see those glasses come into reality, and I think we want to play our part in helping to bring them there.”

Touted as the technology of future, augmented reality uses Artificial Intelligence and technology to superimpose information in form of images, text and sound. The most common example of AR is the Pokemon Go Game. Users who installed this game on their smartphones were given tasks to catch Pokemons bouncing around them. The game used AR to let users see Pokémon characters in the real world.

AR devices built in the past

The list of some famous AR devices launched in the past includes Google Glass and Vito Technology’s Star Walk app.

Google Glass launched in 2013 used AR to display sounds, images and videos on a small screen through a tiny projector. The project was not a success and Google pulled back its AR glasses in 2015.

Vito Technology’s Star Walk AR app on the other hand was quite simple in its operation. Users downloading the app had to simply point their smartphone or tablet camera towards a star, and the app told the star’s name.

Facebook may also be using some similar kind of AR in its Marketplace where the user can obtain a lot of information about a product by just uploading a photo of the same on it. We may also see the social media giant making use of the same in its AR glasses.

Taking cues from the acquisition’s tech giants have made in the past, it can be said that companies including Apple, Microsoft and Google are actively working on developing devices based on the AR platform.

While Apple had acquired AR hardware developers Vrvana and Akonia Holographics in the past, Microsoft has already started selling its mixed reality technology based Hololens at a price tag of $ 3,000. Google reportedly is also working on the improved version of Google Glass which it had pulled back in 2015.

Looking to partner telcos in India for smart appliances: LG

Huawei to start smartphone production in India next month

Sony May Launch a New Flagship Smartphone at MWC 2019