Hon Hai Precision Industry Co., the world’s largest contract electronics maker, is planning to manufacture phones under the Nokia brand in the Indian market next year. 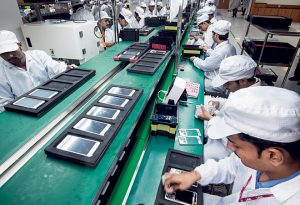 Hon Hai’s head of India operations Josh Foulger as saying that the group is set to expand its operations in India and rolling out devices under the Nokia name will be part of that effort. Hon Hai, which is known as Foxconn outside Taiwan, has invested about US$600 million in India.

On the back of Indian Prime Minister Narendra Modi’s “Make in India” initiative, Hon Hai has drafted a massive investment project in which the Taiwanese manufacturing giant aims to set up 10-12 production plants in India by 2020 to turn the country into one of its global production hubs.

The move to produce phones under the Nokia brand comes after Foxconn teamed up with Finland’s HMD Global Oy earlier this year to acquire cellphone assets under the name Nokia from Microsoft Corp. for US$350 million, with market analysts saying the acquisition targets the booming Indian market.

Hon Hai is one of the most important Apple suppliers, assembling iPhones and iPads. Apple accounts for more than 40 percent of the Taiwanese manufacturer’s total revenue.

Foulgar praised the Indian government’s phased manufacturing program under the “Make in India” initiative, saying it will attract more foreign investors. Under the program, industry and government have mapped out a 10-year roadmap until 2025, which covers all electronics component categories, including semiconductors.

Xiaomi, one of the largest Chinese smartphone brands, will work with Hon Hai to build two factories in India.

August 10, 2020
Apple is currently in the process of debugging iPhone 12’s performance and compatibility LG Display would be supplying 20 million OLED displays...

Samsung Takes Back 2nd Position Behind Xiaomi In India

August 10, 2020
Samsung managed to ship more units compared to Vivo, Realme and Oppo in India during this period The company has also refreshed its...

August 7, 2020
The company has planned to retail the newly launched TVs on Amazon and their website The smart TVs are equipped with LG IPS...

Xiaomi to Invite Component Suppliers to Invest in India