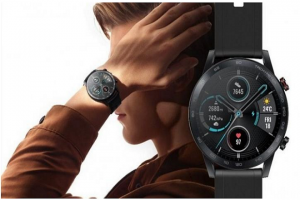 Honor has partnered with Amazon to sell Honor MagicWatch 2 smartwatch and Honor Band 5i fitness band in India. It will make both the products available in India later this month. The pricing of the two products has not been revealed yet by Honor. The Honor Watch Magic 2 was launched in November last year while the Honor Band 5i was launched in China last year.

The MagicWatch 2 comes with Huawei TruSleep 2.0 technology that can track and diagnose six common types of sleep disorders. It also keeps track of heart rate 24/7. It sends an alert when it goes above or below normal levels. As per the company, the watch offers water resistance up to 50 metres. It can also perform underwater and record user’s heart rate and distance, speed and burned calories. The personal health data can be synced to smartphone where the Huawei Health app is installed.

The Honor Band 5i comes with a 2.43 cm (0.96-inch) coloured touchscreen TFT display with a resolution of 160×80 pixels. It has a capacitive home button for easy navigation. It can be plugged into a USB port and can charge itself.

The band is powered by a 91mAh battery which lasts about a week or nine days as per the company. Honor claims that the band takes 1.5 hours to fully charge. It is compatible with devices running Android 4.4 and above and iOS 9.0 and above. On the connectivity front, it supports Bluetooth 4.2. As per Honor, it is water-resistant up to 50 metres.

It has a sleep tracker, exercise tracker with 10 fitness modes. It can also measure SpO2 levels and has TruSeen 3.5 heart rate monitoring. It has sensors like six-axis accelerometer, gyroscope, infrared wearing detection sensor.

Samsung Puts Galaxy A71 Smartphone For Sale For The First Time...