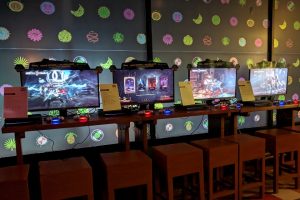 BenQ seems to have taken the ‘collaboration with video games companies route’ to promote its products among the gaming enthusiasts in the world. The company has announced its association with E-xpress Interactive for the launch event of Mortal Kombat 11 video game. BenQ’s EW3270U 32-inch monitor, enabled with 4K HDR technology with AMD Free Sync was showcased at the launch of Mortal Kombat 11.

Rajeev Singh, MD, BenQ India, said, “BenQ has always strived to bring the best and finest entertainment experience, tailored for personal enjoyment. In-line with this vision, our partnership with E-xpress Interactive for the launch of Mortal Kombat 11 through displaying EW3270U will provide the best of HDR viewing experience for console gaming enthusiasts across.

Singh continued, “The game has been a cult across the globe and has always brought together the best Console Gaming Experience. With this partnership, BenQ reiterates its commitment to bringing enjoyment and quality to life through its 4K monitor, enhancing the console gaming experience like never before.”

The event took place on 22nd April ‘19 at Bonobo in Bandra West, Mumbai, and was hosted by E-xpress Interactive Software Pvt. Ltd. and Games Shop Retail Pvt. Ltd., in association with Warner Bros. Entertainment Inc. It seems as if the projector’s company has followed the footsteps of smartphone brands that have announced similar tie-ups in the past.

Smartphone companies that have tied up with online games companies

Oppo is one of the smartphone brands to have taken the ‘collaboration with game companies’ route first. It not only has been a sponsor of PubG tournaments in India but has actually supplied smartphones for PubG tournaments as well.

Vivo, had recently announced its partnership with PubG as well. It had said that the company will be officially supplying smartphones to be used in the PubG Mobile Club Open 2019. It is worth mentioning here that both Oppo and Vivo are smartphone brands owned by China-based BBK.

Ambrane is Going to Launch 20 Products in Next Three Months

Samsung Aims to Enhance Leadership in India During Diwali