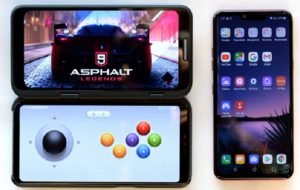 It is to be noted here that all major smartphone brands, including the likes of Samsung, Oppo and Huawei, have also showcased 5G smartphone models at the same event. Samsung and Huawei have also unveiled their folding smartphones at MWC 2019.

LG’s official statement read, “In preparation of the roll-out of its first 5G phone, LG is partnering with 10 major carriers in markets where 5G service will be launched this year, including the United States, South Korea, Australia as well as a number of European countries.”

Company’s official statement read, “Inheriting the V series’ thin, stylish design, the LG V50ThinQ 5G is only 8.3 millimeters in thickness and weighs only 183 grams. To maintain its sleek profile with uninterrupted lines, the rear lens housing on the new V smartphone are completely flush with the back of the phone. All this is achieved without sacrificing the durability of the LG V50ThinQ 5G, which continues to comply with 14 U.S. military MIL-STD 810G standards.”

Mobile phone Sales All Set to Contract by 2.4 per cent...