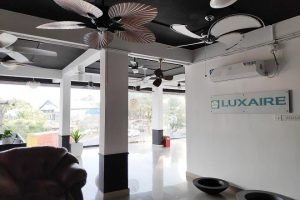 The experience zone will exhibit 70 Original Designer Fans, 24 Fiberglass Designer Planters and 8 Top End Lighting Models from the House of David Trubridge, New Zealand. The prices of the fans range from Rs. 15,000 to Rs. 1,75,000.

Kochi is a great market

“We are thrilled to open our first store in Kochi. Kochi is a great market, full of possibilities and perspectives. The city has massive consumption potential. The market is currently warming up to luxury, and is in a nascent stage, waiting to explode. We think the time has come, to establish new Luxury Markets beyond Metros” said Nisha Kukrejah, founder – Luxaire Fans.

Gone are the days when ceiling fans were considered as wind blowing machines. Companies including the likes of Ottomate, Fanzart, and Atomberg have brought a revolution out of these. A revolution that is not only a big business opportunity in India, but also in the lands that fall outside Indian borders.

As a matter of fact, ceiling fans have become such a big opportunity that an Indian startup is nearing revenue of about Rs 1000 million from its business around these. Called Atomberg, this startup is located in Mumbai and is led by engineers from IIT.