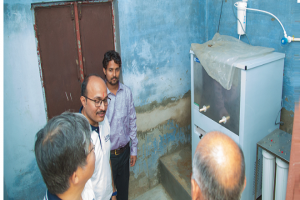 Mitsubishi Electric India has started an initiative where it will provide clean and cold drinking water facility to four rural Gurugram government schools. Under this initiative the total number of schools supported by the company in Gurugram is nine till now benefitting 1500 students. The employees of the company also planted around 150 trees in the periphery of school playground at government senior secondary school in Siwari.

Katsunori Ushiku, managing director, Mitsubishi Electric India said “I am happy to attend this activity for the second consecutive year. Last year in rural Gurugram, we started with one school and am happy to announce that this year we will cover more schools with total 11 drinking water facility installations. The company will extend its support to more schools in coming years as well, thereby supporting to maintain a healthy ecosystem”

The company says that this program is under its Corporate Social Responsibility strategy initiated in 2018 which covers UN Sustainable Development Goals (SDGs) of clean drinking water and sanitation and climate action. As per Mitsubishi, this program is part of its aim to support to Government of India’s Swachh Bharat Abhiyaan and National Mission for a Green India.

Panasonic Plans to Revamp its Smartphones market in India