Untill now, the China-based smartphone brand was only retailing Realme 3 in 3GB RAM and 32GB ROM, and 4GB RAM and 64 GB ROM variants in India 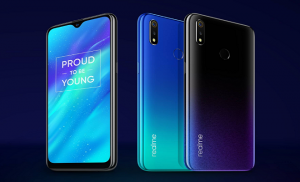 Realme, a China-based smartphone brand that operates under the umbrella of BBK, has added a 3GB RAM + 64GB ROM variant to Realme 3 smartphone family in India. The brand had launched the smartphone about a month ago in the country.

Celebrating one year in India

It is to be noted here that Realme is celebrating its first year anniversary in India today. Madhave Sheth, CEO, Realme Mobiles tweeted, “Within one year of our inception, we have broken records and pushed beyond limits to give you the best experience. Thank You for all the love we have received.”

A recent report by Counterpoint Research had said that Realme was among the top four largest smartphone brands in India during Q1 2019. Madhav, mentioning the same report, tweeted, “Congratulations! to all our users and team Realme for becoming the 4th Largest Smartphone Brand in India. Also congratulations to the top 3 brands on the list as together we are improving the user experience for all Indian users.”

Realme comes equipped with three slots for sim cards and external SD card. It comes powered by a 4230 mAh battery and is coupled with Helio P70 processor. Realme’s India website claims that its newly launched screen battery optimisation increases battery life by up to 10 per cent.

It features a dual camera setup on the rear. This camera setup consists of a 13 MP and a 2 MP lenses. The company has equipped it with a 13 MP camera sensor at front and a 6.22-inch (15.8cm) display screen. It also features fingerprint sensor and face unlock features.