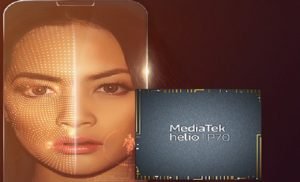 A tweet made from the official Realme Twitter handle said, “We are known for changing the game and here is another game changing move from us. Realme will be the first brand to launch MediaTek Helio P70 products globally.”

Realme 2 Pro is currently available at a price of Rs 13,990 on Flipkart while the Realme C1 is retailing for Rs 6,999 on the same e-commerce portal.

It is expected that the company will launch a MediaTek Helio P70 SoC smartphone in the next two months.

Built with TSMC’s 12nm FinFET technology, the Helio P70 features a multi-core APU operating at up to 525 MHz for fast and efficient edge-AI processing. To maximize the performance of demanding AI applications, the chipset packs four Arm Cortex-A73 2.1 GHz processors and four Arm Cortex-A53 2.0 GHz processors in an octa-core big.LITTLE configuration. For an additional power boost, the chipset has an improved Arm Mali-G72 MP3 GPU operating at up to 900 MHz, which provides a 13 percent performance improvement compared to the Helio P60.

TL Lee, general manager of MediaTek’s Wireless Communication business unit, had said, “With an enhanced AI engine that works seamlessly across the CPU and GPU, Helio P70 delivers much faster performance for AI applications and is still highly power efficient. The introduction of Helio P70 continues MediaTek’s commitment to deliver high-end smartphone features and advanced technology for the mass market.”

MediaTek Helio P70 processor will be available from November 2018.

Karbonn to manufacture 30 million smartphones per year from Haryana plant