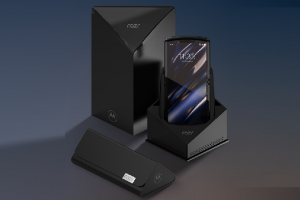 Reliance Jio has announced eSIM service support on the recently launched Motorola Razr. It is to be noted here that Razr is the first-ever clamshell-style foldable display smartphone in the world. The smartphone is slated to go on sale at Reliance Digital at a price of Rs 124,999.

“Jio’s eSIM service allows Motorola Razr users to make and receive calls, use data and applications on the Jio network, without a physical SIM card. All Jio prepaid and postpaid customers can use the service at no additional cost. eSIM enables seamless device setup experience, without the need to insert or replace a physical SIM card,” read Reliance Jio’s official statement.

The online channel, including the likes of Flipkart, has also listed the phone at a price of Rs 1,24,999. The website, however, shows the original price to be Rs 1,49,999.

Reliance Digital is present in online and offline channels

The brand recorded 12 per cent growth in Q2 2019 in consumer electronics. It also said that as many as 100 new stores were opened during the quarter. The total number of stores operated by Reliance Digital stand at more than 8,200.

The Motorola Razr is the first clamshell-style foldable display smartphone in the world. It features Qualcomm Snapdragon 710 processor and is powered by Android 9 Pie. The brand has empowered it with 6GB RAM and 15W fast charging.

This folding smartphone by Motorola also features a non-removable 2510 mAh battery and a 6.2-inch foldable pOLED screen. It comes equipped with a 16MP rear camera and a 5MP front camera. Motorola is a smartphone brand and is owned and operated by the Lenovo group.