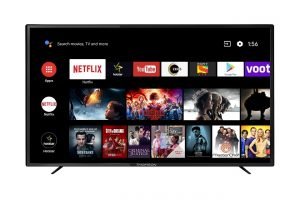 Thomson has announced it will offer discount on its TVs during the Diwali sale that will be held from 21st October on e-commerce website Flipkart. The company also said the price range during the sale will start from Rs 5,999 for the 24-inch HD LED television.

Avneet Singh Marwah, CEO, Super Plastronics private limited, official brand licensee for Thomson TVs in India said, “We want to thank all the customers for giving a tremendous response this festive season and making Thomson, one of the fastest growing online smart TV brands across India. In just a year we made it to Top 3 online brands in the country. With Flipkart Big Diwali Sale customers have the last chance to avail some great offers that we have lined up for them.”

The company said in an official statement, “Thomson TV, which launched only last year, has become the number 2 selling TV company in the Indian online space. With the increase in sales, this festive season, Thomson TV is eyeing a revenue target of 500 crores.”

In June this year, Thomson had announced the launch of its Official Android TV series in the country. The brand had launched 65, 43, 49 and 55-inch smart TVs under this new series.

According to a recent report, the online television sales spiked at 20 per cent for ‘flat panel tv sets’ in 2018. Thomson, after its re-entry last year, adopted the ‘sales via e-commerce’ strategy. Thomson has been selling TVs in India via Flipkart’s e-commerce portal.

Super Plastronics Aims to Sell 2 lakh TVs in The Current...

Honor Will Launch Watch Magic and Honor Band 4 on January...