The Latest Apple products will only be available in US for now. However details for all these are already available on Apple India website 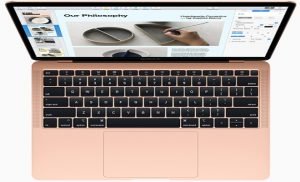 Apple, at an event held in US has introduced the new MacBook Air, iPad Pro and Mac Mini to the world. The tech giant famous for iPhones had also introduced the 2018 range of iPhone XS, iPhone XS Max and the iPhone XR just last month.

Tim Cook, CEO, Apple took on twitter to post, “Thank you everyone who helped make today’s Apple Event unforgettable. We’re excited to see what people around the world create with the new iPad Pro, MacBook Air and Mac mini!”

Updated after a long time, Apple’s MacBook Air now comes integrated with 8th-gen Intel processors and features a 13.3 inch retina display. Apple has endowed the latest MacBook air with its latest T2 security chip which not only protects the Touch ID info but also hosts an always-on processor to listen to commands given to Siri. The inclusion of Touch ID for unlocking the device, also marks a big change in Apple MacBook Air.

The hardware specs on the new Apple MacBook Air include dual-core Core i5 CPU, Intel UHD graphics, two Thunderbolt 3 ports, 4k / 5k displays and more. Apple claims up to 12 hours of web surfing and 13 hours of movie playback on iTunes off a single charge.

MacBook Air starts at a price of $1,199 (approx. Rs 88,000) in US. The brand has yet not confirmed about the latest MacBook Air laptop availability in India.

Available to choose between 11-inches and 12.9 inches screens, the latest Apple iPad Pro features liquid retina display, powerful 7nm A12X Bionic mobile chipset and a combination of an octa-core CPU with a seven-core GPU. It boasts minimal bezels around the fascia and a Neural Engine to enable AI processing, faster Face ID unlock and AR capabilities.

The inclusion of a Type-C port on the latest Apple iPad Pro allows it to connect with external displays that offer up to 5k resolution. Consumers will now be able to charge iPhones using these latest iPads.

“The new iPad Pro is a huge step forward for powerful, creative, mobile computing; it has an all-new thinner design, speeds through projects with the super-fast A12X Bionic chip and unlocks with a glance using Face ID in any orientation — while you’re sitting or standing, with iPad Pro on your desk or lap, with the new Smart Keyboard Folio and new Apple Pencil,” said Mr. Schiller. He continued, “There has never been a mobile device anything like the new iPad Pro; it has a gorgeous edge-to-edge Liquid Retina display that curves into the corners, breakthrough performance that outperforms most laptops, Face ID, support for the new Smart Keyboard Folio and new Apple Pencil, advanced new cameras and sensors for the best AR experiences ever in any device, a high-speed USB-C connector, louder speakers, faster wireless and more, all packed into a thinner device that has all-day battery life and is 25 percent smaller in volume.”

Apple has also announced a new Mac Mini for people looking for desktops integrated with macOS.

Drawing power from Intel’s 8th-gen chipset, the new Apple Mac Mini comes coupled with Intel’s UHD graphics for faster performance in comparison to its predecessor. The new version of Mac mini supports up to 64GB of RAM and up to 2TB SSDs. Apple has also integrated T2 Security Chip in its latest offering to ensure that the data on the SSD gets securely encrypted.

Philip Schiller, Apple’s senior vice president of worldwide marketing said, “Mac mini customers are going to flip over the new Mac mini. It has more than five times the performance, up to 6-core desktop-class processors, an Apple T2 Security Chip, faster memory up to 64GB, high-performance all-flash storage, and is packed with advanced ports including four Thunderbolt 3, two USB-A, HDMI video, audio and Ethernet up to 10Gbps. All of this power is packed into the same size enclosure as before, perfect for customers updating or creating all-new installations where Mac mini is the ideal solution.”

The price of new Apple Mac Mini starts at $ 799 in US (approx Rs 59,000) and it is only available to buy in the United States at the moment.

Exclusive: Samsung is Planning to Launch TV Dongles in India