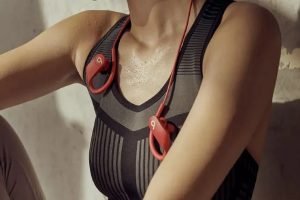 Global giant Apple recently announced a latest edition of the Powerbeats earphones. The new wireless earphones have upgraded in terms of design and battery life. According to report, the product now gets a price slash that might make it a more compelling deal over the fitness-focused AirPods.

The new Apple Powerbeats start at $149 (about Rs 11,000). This is about $50 less than the Powerbeats 3 wireless earphones. They were priced at $199 (about Rs 14,710). The lower price of the new Powerbeats earphones are hence one of its major selling points.

The new Apple Powerbeats come with a modern design. The design consists elements of the completely wireless Powerbeats Pro and adds a cord. Surprisingly, Apple did not even announce the new earphones on its own website. The product was silently launched on the Beats by Dre website. This is to perhaps avoid conflict with the AirPods and AirPods Pro. As informed by the company, the AirPods series is currently the only line of pure-Apple audio accessories that the brand is focusing on.

The new Powerbeats will be launched commercially on Wednesday, March 18, 2020. Speaking of the new improved battery life, the Powerbeats are rated at 15 hours on a single charge compared to the 12 hours on the older Powerbeats3. Both Apple and Beats will be selling the new earphones in three color variants. These are red, white and black.

The new Powerbeats earphones now feature the same H1 chip that is also used by the Apple AirPods Pro. The chip is also used on the second-generation AirPods and the Powerbeats Pro. Hence, there is also support for Hey Siri commands and Apple’s iOS Audio Sharing. One major difference against the Powerbeats Pro is that the new earphones do not feature a charging case. You charge them directly by plugging in a lightning cable into the port.

Xiaomi is Launching its First Grooming Product in India Today

Tecno To Launch Camon 15 Smartphone in India on 20th February