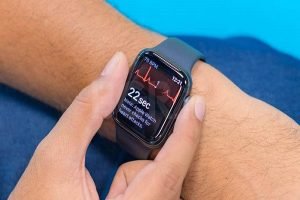 The wearables from the Apple Watch series have been well recognised feature-packed devices in the market. The design of the smartwatch has also been an inspiration for many other brands who are venturing into the smart wearables market recently.

According to a report, the global giant is planning to bring oxygen detection and an improved ECG to its next line of wearables. Alongside the next flagship iPhones, the next wearables could be launched in the third quarter of 2020. It has also been revealed that the company might also improve ECG support on its existing watches.

Blood oxygen sensing gives people an idea of how oxygenated their blood is. Levels between 95 percent and 100 percent are considered healthy. On the other hand, there are chances of health issues or cardiac arrest if the blood oxygen levels are below 80 percent. This feature can make users aware that they’re running low on oxygen well before they risk facing cardiac arrest. Additionally, the watch will also pop a notification when the level falls below the ideal threshold. The feature is said to function similarly like the notification received for an irregular heart rate.

As of now, the brand is also working on removing a current shortcoming of the current electrocardiogram function reportedly. Hence, this will enhance the ECG performance on subsequent renditions of the Apple Watch. The Apple Watch Series 4 and 5 presently result in inconclusive ECG readings with heart rates between 100 and 120 beats per minute and the new update will remove that limitation with an upgraded version of the ECG app.