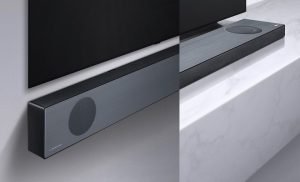 LG Electronics has announced its latest range of soundbars. The appliances and consumer electronics giant has collaborated with Meridian Audio to develop these soundbars. All the three soundbars namely – SL10YG, SL9YG and SL8YG feature Google Assistant support and Dolby Atmos. The brand will be showcasing these at the CES 2019 event scheduled to take place in Las Vegas.

LG has been working with Meridian in order to improve sound quality across its product portfolio for a long time. Brand’s official statement read, “The collaboration goes far beyond basic fine-tuning or the adoption of feature-sets, with both companies joining forces to engineer sound delivery for a truly unrivaled listening experience.”

These high-end soundbars (models SL10, SL9 and SL8), as claimed by LG, support both Dolby Atmos and DTS:X. The technologies facilitate realistic surround sound that seems to originate from multiple directions. With some of LG’s premium soundbars supporting high-resolution audio via an advanced processing algorithm that can upscale conventional file formats, the output comes even closer to studio quality.

Built-in Google Assistant in LG’s new lineup of soundbars offers convenience of AI smart connectivity and voice recognition. Users can control these LG soundbars by giving simple voice command such as, “Hey Google, increase the volume,” or “Hey Google, what artist is playing?”

LG says that the soundbars can also be used to control connected devices inside a house. Kim Continued, “LG’s 2019 soundbars deliver amazing performance tuned in close partnership with Meridian Audio with the convenience of smart AI connectivity.”