LG, last week, had also announced about showcasing a new soundbar range at the same event. The brand said that it had collaborated with Meridian Audio for the same 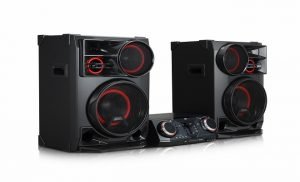 An official statement by LG read, “It also offers Meridian Mode, developed in collaboration with the experts at renowned British company Meridian Audio. This exclusive sound setting results in clearer vocals and more responsive bass, perfect for sound buffs who enjoy listening to music while relaxing at home.”

LG Xboom Go PK series speakers will also make their debut at CES. These portable speakers support aptX HD codec for lossless 24-bit audio when streaming from the latest smartphones such as the LG G7.

LG said ,”The PK series generates high-quality audio that will satisfy even the most discerning listeners, producing stunningly accurate wireless sound and giving the XBOOM PK a solid advantage in the on-the-go category.”

All 2019 LG Xboom products will come loaded with a new ‘Karaoke Star’ feature. Karaoke Star feature, are LG, can suppress the vocals on almost any track. LG official statement regarding this feature read, “The 18 unique vocal effects pair perfectly with the new Multi-Color Lighting feature, a range of preset lighting options including the ability to sync with whatever track is being played, accentuating the beat and heightening the ambience.”

Kim Dae-chul continued, “We are excited about the present and future of the LG Xboom brand and will continue to strengthen our offerings and our position in the party-audio market.”

Samsung Electronics to Link Bixby to Home Electronic Products by 2020