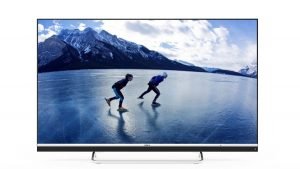 Nokia Smart TV with a 43-inch screen is all set to release in India on June 4. The 43-inch variant will sit alongside the Nokia Smart TV 55-inch model that was launched in India in December last year.

The company website has been teasing the arrival of the 43-inch variant since March. It may have been delayed due to the coronavirus lockdown.

According to a report by a leading daily, Flipkart has confirmed that the new smart TV will be positioned at a price point ranging between Rs. 31,000 to Rs. 34,000 in India, and the Nokia Smart TV 43-inch variant will go on sale exclusively via Flipkart. The company has also assured to disclose other details soon.

There are two 12W speakers onboard with Dolby Audio and DTS TruSurround. The 55-inch Nokia Smart TV has support for apps like Netflix, YouTube, Disney+ Hotstar, and Prime Video, and the 43-inch model will likely support them as well. It is also expected to offer Chromecast built0in and support for Bluetooth v5.0.