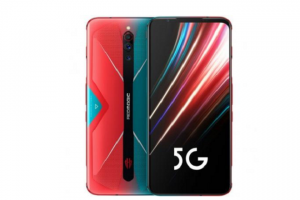 Nubia launched the Red Magic 5G in the market, competing against the high-end smartphone models already introduced. The newly launched smartphone manages to achieve a couple of feats that no other smartphone can currently boast.

Powered by the Snapdragon 865 and the Adreno 650 GPU, the world’s first 5G gaming smartphone boasts a storage of 16GB of LPDDR5 RAM and 256GB of UFS 3.0 storage. Both NSA and SA standards are supported due to the Qualcomm Snapdragon X55 modem.

The Red Magic 5G also houses a cooling solution in order to sustain peak performance. Hence, it features an L-shaped cooling chamber that uses a combination of thermal paste, copper foil, and graphite. There are vents on either side of the phone to assist in air circulation.

Capacitive shoulder buttons, 4D haptic feedback with a linear vibration motor, and docking pins on the side to connect peripherals such as Ethernet, headphones and charging cables are the other gaming-centric additions.

The Red Magic 5G also comes with a 144Hz refresh rate. It has a 6.65-inch AMOLED panel with a 240Hz touch sampling rate. It uses Goodix’s latest in-display fingerprint scanner too. Moreover, it covers 100% of the DCI-P3 colour space.

Talking about the cameras, the Red Magic 5G has three of them on the back. The primary camera is the 64MP f/1.8 Sony IMX686 sensor, followed by an 8MP ultrawide shooter and a 2MP macro lens. The selfie shooter also uses an 8MP camera. New shooting modes include anti-shake video recording and a vlog mode.

Redmi Note 9 Pro to be Released in the Indian Market...

ZTE to launch its smartphone brand in India