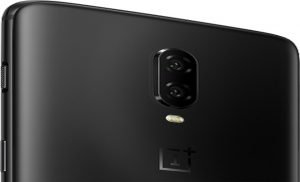 China based smartphone maker, OnePlus unveiled the OnePlus 6T on Monday in US. Touted as the biggest event by OnePlus in the US, company’s CEO and founder Pete Lau said that it was his first time on stage in the country.

OnePlus 6T will be company’s second smartphone in the year 2018. It features a small notch, in-built finger print scanner and a 6.41-inch OLED screen supporting 2340×1080 resolution with a aspect ratio of 19.5:9.

The new flagship smartphone from the stables of OnePlus will be available in two variants with 6GB and 8GB RAM options, and 128 GB and 256 GB storage options.

Company offers the same RAM options on the OnePlus 6 model.

The latest OnePlus phone will come with company proprietary OxygenOS and Android 9 Pie. It will use Snapdragon 845 as processor.

OnePlus 6 smartphone also comes integrated with a Snapdragon 845 processor. However, it uses the Android 8.1 version. OnePlus 6 users have already started receiving Android updates on their phones.

The Chinese based mobile phone manufacturer has used 2.5D Corning Gorilla Glass in order to make the phone tough. All the OnePlus units shipped in the US will come with a pre-applied screen protector for keeping phone’s screen safe against scratches.

The company will be launching OnePlus 6T in India, in an event today. It is also available for pre-booking through Amazon India website. The prices for the India OnePlus 6T model have not been revealed yet.