Interestingly, Huawei is also going to unveil its P30 smartphone range today in Paris. Like Samsung A70, it is rumored that Huawei P30 will also feature a triple camera setup 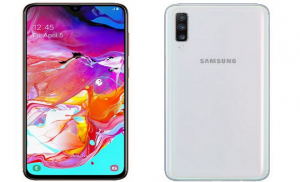 Samsung Electronics has unveiled the Galaxy A70, the newest smartphone in the Galaxy A range. The Galaxy A70 smartphones showcases infinity display and triple camera setup. Samsung said that the company has designed this smartphone for digital natives who want to capture, connect and share life as it happens.

DJ Koh, President and CEO of IT and Mobile Communications Division at Samsung Electronics, said, “Today’s consumers are using their phones in a more visually active and authentic way – sharing their experiences and staying connected longer. These connections can only thrive when the most essential features allow people to enhance interactions through spontaneous, collaborative, and genuine connection. This requires an evolution. Which is why, to meet the needs of this emerging generation, we created the new Galaxy A70 – designed for the way people are connecting now.”

The company has already announced Samsung A30, A10 and A50 devices in the A Series smartphones line-up. Interestingly, Huawei, a China-based smartphone maker, is also going to unveil its P30 smartphone range today in Paris. Like Samsung A70, it is rumored that Huawei P30 will also feature a triple camera setup.

Galaxy A70 features a 6.7-inch Infinity-U display along with the biggest screen in the Galaxy A portfolio to date. It is housed in a 20:9 display ratio. The rear camera setup on the smartphone includes a primary 32 MP lens combined with a eight MP ultra wide lens. The front camera on this smartphones is also a 32 MP one. Samsung claims that Galaxy A70’s scene optimiser that can recognize and intuitively enhance up to 20 scenes.

It is powered by a 4,500 mAH battery. Samsung says that it has equipped the smartphone with super-fast charging technology at 25W. This smartphone also features a on-screen fingerprint scanner.

Samsung’s official statement read, “Paired with Samsung Pass, people can sign into websites and apps by using biometric authentication as an easier and more secure way of logging-in. This ease and convenience is enabled by Samsung Knox, Samsung’s defense-grade security platform designed to protect from chipset to software. Samsung Knox gives you a piece of mind about your privacy on the Galaxy A70, so you can use your phone freely with ease.”

The company is yet to announce its pricing for the Indian market. However, going by the name, it is strongly expected that Samsung will price it below the A90 smartphone.

Infinix Planning To Launch 7-8 New Smartphones in India in H2...