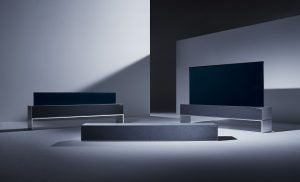 A jury panel of 67 design experts convening in Germany awarded LG with 16 recognitions, among them the iF Gold Award for the LG OLED TV E9. Winners were announced in Munich at the iF Design Award 2019 ceremony. This year, 66 products were recognized with iF Gold Awards among 6,375 entries received.

LG OLED TV (model E9) secured the iF Gold Award for outstanding design that made the screen more expansive. Company’s official statement read, “The use of transparent glass at the bottom with the stand recessed far behind the display creates a more immersive viewing experience that draws the eyes to display. According to the iF judges, LG designed a TV where the screen appeared to ‘float in air, the ultimate objective of every TV designer.”

LG products that won iF awards

A wide array of OLED products such as LG Signature OLED TV R, 8K OLED TV, OLED TV and Transparent OLED Signage were recipients of iF awards this year. Most notable among iF Design Award recipients is the LG Signature OLED TV R, also known as the world’s only ‘rollable’ TV for its ability to disappear into the low-profile base when not being viewed to maximize and simplify the living space.

Since 1953, designers and manufacturers have endeavored to win the renowned iF label for design. Conferred by the iF International Forum Design GmbH based in Hanover, the iF Design Award is recognized as one of the top three design awards in the world, alongside the Red Dot Design Award and IDEA (International Design Excellence Award).

“Great design is being able to anticipate the needs of our customers,” said Noh Chang-ho, vice president and head of corporate design at LG Electronics. “At LG, we will continue to introduce designs that exceed consumers’ expectations.”

Samsung has Driven the Trend of Premiumization in India: Raju Pullan