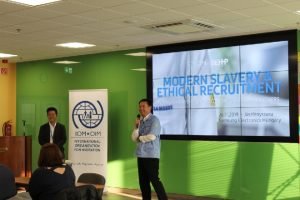 Samsung Electronics and the International Organization for Migration (IOM) recently collaborated to host a workshop entitled “Modern Slavery and Ethical Recruitment.” It was organized to spotlight ways to reduce the business risks associated with modern slavery.

It was the second such workshop that Samsung Electronics and the IOM have hosted – following a similar event held in Kuala Lumpur in June – as part of an ongoing effort to address modern slavery in the electronics industry.

The workshop included presentations from Samsung on basic workers’ rights, and from the IOM on the characteristics and industry-specific risks of modern slavery. Speakers also outlined Hungary’s legal framework for preventing forced labor and discussed business cases for taking action to counter modern slavery, as well as strategies to ensure ethical recruitment practices, the official statement read.

Samsung Electronics said that they will continue its efforts to ensure that workers’ rights are protected throughout its global supply chain.

Will Only Launch 5G Mobile Phones in China: Realme