Connectivity, artificial intelligence, voice control and 5G trends that are  driving consumer electronics will all be on show across the whole network of global IFA events this year 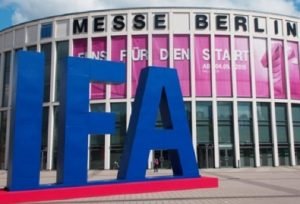 To showcase the latest technology and the latest gadgets, Europe is getting ready for IFA 2019, which is to be held in Berlin from 6 th to 11 th September this year. A preview of the show was held recently for the global press with grand fanfare at IFA Villa that was set up at Punta Umbria Beach Resort in Andulasia, Spain.

On show in Andulasia were Ambeo 360-degree surround sound bar from German audio company Sennheiser, home appliances from European company Haier, an 8K UHD TV from the Chinese company Hisense, Android OLED TVs from Metz in Germany (now owned by Chinese display makers, Skyworth), and a safety device from a startup, called Safera Sense, which can be installed above a stove to monitor air quality and temperature.

Mix of IoT and consumer electronics

Market leader Philips Personal Health DACH’s Marlies Gebetsberger outlined how her company is innovating in the field of data-driven insights into health. Philips Sonicare Teledentistry service, for instance, provides patients with remote dental consultation from licensed dentists within 24 hours. The Philips Sonicare app acts as a ‘virtual hub’ for personal oral healthcare. Users can manage their complete oral care daily and share brushing data with their doctors, putting personalised guidance and advice at their fingertips.

Chinese brand TCL’s Marek Maciejewski, product development director, TCL Europe, said their company is aiming to be among top three in Europe for audio and air-conditioning by 2022. New TCL TVs will feature mini-LED in 1000 zones – that’s 20,000 LEDs – while their super-slim TV is less than 1cm thick. In July, TCL Europe will launch its first ranges of headphones – four ranges in total – aswell as a standalone sound bar.

While IFA has always been visionary, ever since the days when Albert Einstein addressed the event, it is also the ultimate showcase for audio technologies. That’s why IFA and Sennheiser announced their official audio partnership at the IFA global press conference.

Connectivity, artificial intelligence, voice control and 5G are the big trends driving innovation for consumer electronics and home appliances in this new era, and these will all be on show across the whole network of global IFA events this year – from the world’s largest technology show, IFA Berlin, to IFA events like CE Week in June in New York and CE China in Guangzhou in September.

Experience Stores: Touch it, Try it and May be Buy it?