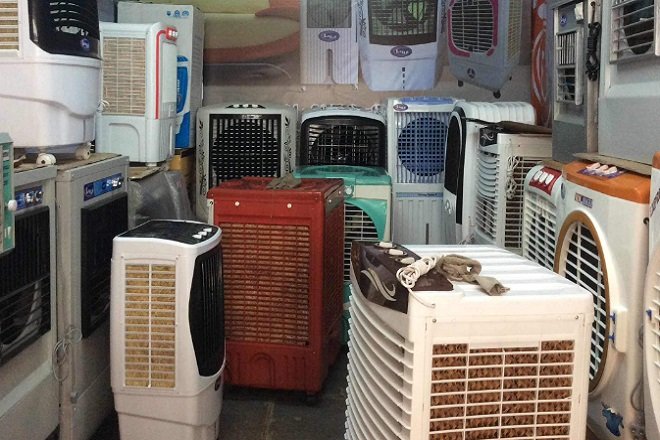 Sales of air coolers have skyrocketed beginning this month due to the rising mercury level. Thanks to lower price bands and lower maintenance costs, unbranded air coolers are selling more than the branded ones in India. The country’s capital, New Delhi, on June 11, recorded maximum temperature readings of 48-degree Celsius.

He sees rise in temperature as the primary reason behind this sharp increase in sales figures.

A visit at some of the consumer electronic stores in these areas also reveals the fact that such stores do not even put air coolers on display during the season. They are kept either at a corner in the shop, or sometimes in the storage houses.

The scene, however, is completely different in the markets that are adjacent or located in areas where the majority of population falls in the middle and lower middle class category. A lot of consumer electronics showrooms here display air coolers at the front during summer. Most of these displays give more weightage to unbranded air coolers.

Goyal, whose shop is located in a small locality in Faridabad, claims to have sold more than 150 coolers in last 15 days. The point to be noted here – there are more than 60 electronics shops in this locality alone, and there are more than 25 such localities in city. The moment of truth – All these shops sell unbranded air coolers during the summer season.

Why? Goyal explains, “A top quality unbranded air cooler for a family of four people, costs around Rs 5000 only. A branded one with similar cooling is almost double this price. Most of the consumers here either live on rent and their pockets are not that big.”

Maintenance is no fuss

Another market located in Delhi has an entire street dedicated to sales of consumer electronics, and shops there display unbranded air coolers in all shapes and sizes. Jairaj Singh who works as a sales-cum-repair executive there, told us that branded air coolers and air conditioners are made available only on advance orders. The shop he works at does not even have a single branded air cooler on display.

The game of margins

A shop owner said, “Margins in unbranded air coolers are more than branded ones. We do not have to depend upon companies to provide service for unbranded air coolers. Our workers can easily replace motors, water pads and fans as well. Many of us even get air coolers made in bulk before the season. We start selling these by the end of April and the sales continue till August.”

Out of curiosity, we asked how much getting an air cooler tailor made would cost us? His reply (translated from Hindi to English), “A plastic body will cost no more than Rs 3,000, while the cost of a metal body would depend on its weight. We will charge a fee of Rs 650 for assembling the air cooler and delivering it your house.”

It seems big companies will have to do a lot of ground research if they want to compete against local air cooler manufacturers. But what if these local manufacturers start assembling air conditioners on the same lines they get these air coolers manufactured and retailed at?

Flipkart in Talks With Nokia and Motorola For Partnership: Report

Experience Stores: Touch it, Try it and May be Buy it?