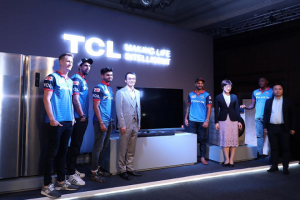 Electronics For You, in February 2019, had said that China headquartered TCL was planning something big for India. Then came the news that TCL was signing up as a sponsor for Delhi Capitals IPL cricket team. Now, the company has launched several smart consumer electronics in the country.

TCL India country manager, Mike Chen, said, “Our new range of smart home appliances is designed to cater to the specific requirements of tech-savvy Indian consumers and resonate with their mature sensibilities. The latest launch also takes us one step closer to our vision of becoming the first innovative consumer durable brand in India with a full range of smart home products and offering our customer an unparalleled connected experience.”

The China-based company has launched smart TVs, ACs, washing machines, refrigerators, sound bars and audio solutions in India. It is also to be noted here that Xiaomi, one of the fastest growing smartphone companies in India, had recently picked up 65,168,803 shares of TCL’s home appliances business.

India is a strategic market for TCL

Chen while addressing the media at the launch event mentioned India, as a strategic market for TCL. He said, “India is a strong strategic market for us, and we have always made sure to study the changing demands of masses when it comes to offering high-end digital TVs at affordable prices. We hope our new range of TVs and smart home appliances will perfectly satiate the lifestyle needs of the new-age Indian consumer. We will continue to build more such innovative offerings in the future to build on the exceptional market reception that our products have received, and to further consolidate our leadership position within the Indian market.”

A recent report by Goldstein Research had forecast that the India consumer electronics industry is set to reach USD 17.2 billion by 2024, growing at a CAGR of 5.91 per cent. It would not be wrong to say that India is one of the fastest growing consumer electronics market in the world.

TCL had also inaugurated its panel factory in December last year in Tirupati, Andhra Pradesh, marking its first manufacturing unit outside of China. This move, as per the company, had two objectives – offering Indian-centric products at competitive prices and creating over 8,000 job in the region.

Focus on IoT in consumer electronics

It seems that IoT, AI and ML are the new found focus for TCL in terms of consumer electronics. Chen, did not hesitate in mentioning the use of these technologies time and again during the event. Interestingly, IoT has been the talk of almost every consumer electronics company since last two years.

Chen said, “We have always stayed committed to offering the latest features at the most affordable prices to our users through products backed by state-of-the-art technologies, such as artificial intelligence and IoT.”

TCL’s official statement read, “With an in-depth understanding of the Indian market, TCL strives to study the on-going market requirements, innovate, and offer the latest technologies to users. The brand has integrated AI-enabled Google assistance in its range of products and has a significant competitive advantage in key areas like OLED printing technology, Quantum Dot display material and technology, and AI and IoT in the home appliances segment.”

Amongst TCL’s recently-launched smart refrigerators is a 520L side-by-side as well as a 545L double door intelligent refrigerator. Along with inverter compressors and water dispensers, these refrigerators come equipped with no-frost technology, AAT freshness technology, smart swing airflow technology, and inner partition storage. TCL claims that this ensures proper cooling of food on all corners, ensuring freshness for a long period of time, with fast freezing.

TCL has launched its smart washing machines in three variants: the front-loading G series (6/7/8.5 kg), the front-loading K series (9kg), and the top-loading B series (6/7/8/9 kg). The smart washing machines in the G series and the K series come with a water sealing, non-pollution design, honeycomb crystal drums, BLDC inverter motors, and intelligent automatic detergent inputs, with the latter also equipped with a touch screen display.

TCL’s B series smart washing machines, on the other hand, come with a water fall spray wash, honeycomb crystal drum, a detachable and cleanable pulsator, a 3-D storm wash, and a DDM motor.

TCL has also introduced 3-star smart inverter ACs with cooling capacities of 1, 1.5, and 2 tonnes, along with a fixed-speed 2-star 1.5 tonne AC under its Elite series. Armed with smart airflow and AI-inverter algorithm, TCL says that the 3-star ACs are able to deliver rapid cooling in 30 seconds.