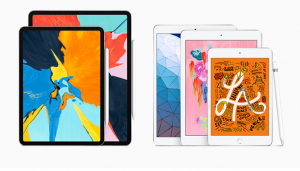 Phil Schiller, Apple’s senior vice president of Worldwide Marketing said, “Today the iPad family takes two big leaps forward with an all-new 10.5-inch iPad Air that brings high-end size, features and performance at a breakthrough price, and a major upgrade to the 7.9-inch iPad mini, which also brings Apple Pencil, Retina display and the A12 Bionic chip to the many customers that love its compact size.”

The Cupertino based tech giant has equipped both its new offerings with the A12 Bionic Chip coupled with company’s neural engine. Company’s official statement for iPad Air read, “With the A12 Bionic chip with Apple’s Neural Engine, the new iPad Air delivers a 70 percent boost in performance and twice the graphics capability, and the advanced Retina display with True Tone technology is nearly 20 percent larger with over half a million more pixels.”

It continued about iPad Mini. “With the A12 Bionic chip, the new iPad mini is a powerful multi-tasking machine, delivering three times the performance and nine times faster graphics. The advanced Retina display with True Tone technology and wide colour support is 25 percent brighter3 and has the highest pixel density of any iPad, delivering an immersive visual experience in any setting.”