Piyush Goyal will be presenting the Interim-Budget 2019 in the Parliament soon. The appliances, smartphones and consumer electronics industry is expecting a budget that will boost local manufacturing in India 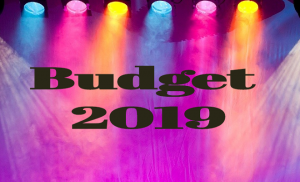 The point to be remembered here is the fact that it is almost election time and the central govt. will most likely present a budget that not only brings a smile on the faces of ACE consumers but also the whole ACE industry.

Interim Budget Bill 2019 has been introduced. Monday the 4th of February 2018 has been set as the date of discussion for the same.

Saved money from annual taxes might increase the spending power of middle-class consumers on appliances and consumer electronics.

12:17 – “India is on its way to become the global hub of electronics manufacturing”, Piyush Goyal.

However, no statement on whether the future approach will be on ‘Make in India’ or ‘Assemble in India’, has been made by the minister.

Consumer electronics industry can definitely play a huge role in achieving that milestone.

12:05 – “Exemptions on GST for small business increased from Rs 2 Million to Rs 4 Million.”

This could prove to be beneficial for small smartphone and mobile accessories manufacturing companies in India. Small companies into local manufacturing of screen-guards, mobile phone cases and covers, and earphones might be able to benefit from the same.

11:55 – “Mobile and mobile parts manufacturing companies have increased from two to 268, this has also created jobs in India” Piyush Goyal.

It is to be noted here that smartphone brands with highest Indian market share are either based in China or Korea.

11:41 – “India has become the second largest hub of startups. A national artificial intelligence center to be developed soon in the country” says Goyal.

11:29 – The government, like always, looks forward to increase income of farmers. Increased income will automatically increase the demand of consumer electronics in rural India.

Many consumer electronics brands including the likes of Mi and Transsion Holdings have already started targeting rural markets with different strategies than they follow in Tier 1 and Tier 2 markets.

11:20 – “143 crore LED bulbs given to families during the last five years. More than 2.5 Crores houses given free electricity connections all over India” Piyush Goyal.

It seems as if the honorable minister will run some more self-praise before proceeding with the announcement of Interim Budget 2019.

He said, “Under the visionary leadership of Narendra Modi, I present the interim budget to the Parliament. I also pray for Arun Jaitley’s health and wellness.”

Goyal continued, “We are moving towards 2022 and have all goals clear in our minds. We have the fastest growing economy in the world. We are today the sixth largest in the world. Inflation is a hidden tax on poor we have already shown great measures in curbing it.”

10:30 – Sushma Swaraj along with other Union Ministers Ravi Shankar Prasad and Rajnath Singh has arrived at the Parliament

10:20 AM – Prime Minister has arrived at the Parliament. The final cabinet meeting, before the Interim Budget is presented in Parliament, will commence shortly.

10:00 AM – Finance Minister Piyush Goyal has reached the parliament. He is with President Ram Nath Kovind at President’s residence.

Smartphones had got costlier after the 2018 budget. However, a report by CounterPoint research had claimed India, as one of the fastest growing smartphone markets in the world. It is worth watching what the government will have in place for local smartphone manufacturers and brands.

Several reports had earlier claimed that China-based smartphone brands as leaders in the Indian smartphone market. The customs duty of smartphones were increased to 20 per cent from 15 per cent in 2018.

Similarly, custom duty on imported LCD and LED TVs was increased from 7.5 percent to 15 per cent in 2018. Arun Jaitley, the then Finance Minister, had said that the move was taken to support local manufacturing in India.