Croma is one of the few retail chains in India to have presence in both online and offline sales channels. Apart from 121 stores, it also sales appliances and consumer electronics online 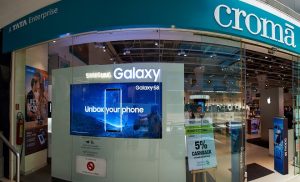 Croma stores, famous as an appliances and consumer electronics retail chain in India, has posted it’s maiden net profit in FY 2018. The filings made with the Registrar of Companies (RoC) reveal that the stores’ chain posted a net profit of Rs 16.64 crore during the 2017-18 period. Croma had posted a net loss of Rs 57.16 crore during the last fiscal.

Owned by Infiniti Retail Ltd, a Tata venture, Croma retail is also positive about ‘progressive reduction in the accumulated losses’. The electronics retail chain expects that profitability will get better due to growth plans.

This is the first time that the brand has filed net profit figures in its 12 years of operations. The first profit figures have reduced the accumulated loss figures to Rs 756.08 crore.

Infiniti Retail, in the RoC filings, has also mentioned about ‘sufficient sources of funds to pursue a growth plan’ to improve profitability. The brand ‘does not expect material threat to its going concern status due to the negative net worth’.

A breather for the offline sales channels

The news might have come as a breather for other offline sales channels dealing in appliances and consumer electronics. Several reports in the last few months have claimed that more and more consumers are turning to online channels to make purchases.

However, the importance of offline sales channels can be ascertained from the fact that several brands have joined the bandwagon of opening offline stores. Xiaomi just recently had announced the opening of 500 Mi stores in rural India, whereas other brands such as Huawei have also shown keen interest in opening physical stores.

Croma is one of the few retail chains in India to have presence in both online as well as offline sales channels. Apart from 121 stores, it also offers consumers appliances and consumer electronics through its website.

The retail brand also launched a store named ‘Gadgets of Desire’ in Delhi in March 2018. Ritesh Ghosal, CMO, Croma, at the time of launch of the store had said, “Croma has always been a customer-centric retail company. Gadgets of Desire is an attempt to come closer to the customers and become a go-to destination for everything in electronics! The new store format is a small neighborhood store that is a totem of the full-fledged Croma store and gives customers a gateway to the entire range of Croma’s electronics.”