The nation’s dubious honour of being home to 15 of the world’s top 20 most polluted cities, has energised a new and burgeoning market segment: air purifiers. A study released this week, sees nearly 30 per cent growth by 2025 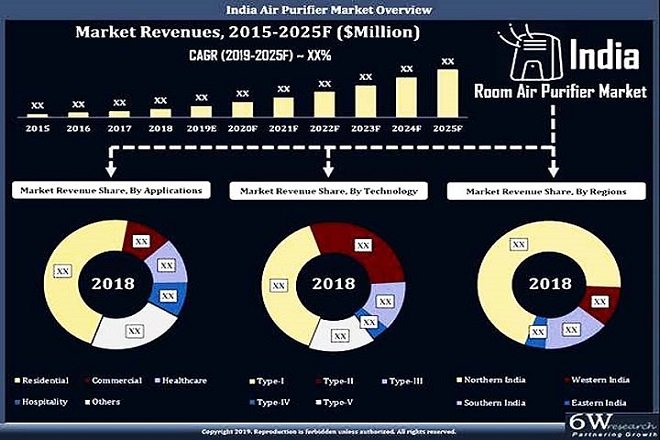 An editorial in the Economic Times on June 5 World Environment Day, put India’s dubious record in stark times. It was titled: “No. 1 in Air Pollution (is) no badge of honour!” It pointed to a report that found that 75 per cent of the cities monitored for air pollution in India failed to meet national standards for air quality.

The key finding is that revenues from the market for air purifiers in India are projected to grow at a CAGR of 26.9 per cent in the period 2019-25. The key drivers are increasing chunk of per capita income that Indians are devoting for healthcare purposes, coupled increasing customer awareness about the ill-effects of air pollution and the rising number of respiratory chronic disorders across the country.

The air quality situation is not seen to be improving much in the short term and air pollution is expected to rise due to rapid urbanization, growing construction activities, vehicular emission, stubble burning across various regions and the bursting of fire crackers during the festive season. More than 1.2 million deaths reportedly took place in the country in 2018 due to air pollution and related respiratory disorders are at all-time high.

Says Apoorva Sawhney, research associate, Research and Consulting, 6Wresearch, “The burning of stubble after harvesting season, spike in pollution levels during festivals such as Diwali and the overall rising construction activities across the region have led to severe decline in the quality of air in many parts of North India. According to the CPCB (Central Pollution Control Board), the average air quality index of many Northern Indian states such as Delhi, Haryana and Uttar Pradesh, was recorded as 337, 351 and 351, respectively in 2018, which falls in the ‘very poor air quality index’ category. The mentioned factors have contributed in making the Northern Region a key demand driver for air purifiers.”

The report cites national capital regions Gurugram, Ghaziabad and Faridabad as the ones ranked amongst the 15 most air polluted cities across the globe.

Going into the technology options available to the customer, Devesh Kumar, Research Associate, 6Wresearch finds: “HEPA (High Efficiency Particulate Air) based air purifiers dominated the India room air purifier market revenues during 2018. This is attributed to certain advantages that the mentioned technology offers such as removal of more than 99% of indoor pollutants and impurities up to the size of 0.3 microns. Other technologies, such as Ultra-violet based air purifiers are anticipated to experience sluggish growth over the coming years due to potential health hazards such solutions pose and the growing consumer awareness regarding the same.”

Not luxury, but necessity

The report concludes : “All these factors have contributed significantly in transforming air purifiers from a luxury product into a rather basic necessity in the country.”

It also reveals that the consumers from the residential sector, showed the maximum deployment of air purifiers in 2018, compared to commercial sectors. The aam aadmi is becoming health conscious and is taking measures to curb the ill effects of air pollution within the home. However the installation of air purifiers across commercial offices, retail malls, hospitals and clinics is also gaining popularity.

India Still Underpenetrated in Adoption of Wearables For Health: IDC