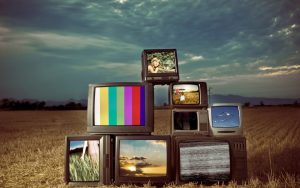 Television industry in the country was hit hard after demonetization in 2016. The announcement of GST in 2017, created yet another road block. Despite the challenges, it managed to grow 10 to 12 per cent during 2017.

Year 2018, in comparison, turned out to comparatively better for the TV industry. Several global and Indian brands were able to do good business in the category. Xiaomi, one of the youngest smartphones and LED TVs brand in India, claimed selling of over 1 million TVs during the year. A lot of OEMs also unveiled their plans to open local TV manufacturing centers in India.

Faisal Kawoosa, Founder, techARC told EFY that there are several reasons responsible for TV segment’s growth in the country. He said, “Few years back, somewhere personal computers and laptops were considered a priority in the gadget household list. This now has been replaced by smartphones. So the dispensable budget goes in favour of TVs. However, local brands might see difficulties again in six months from now as the market will replicate the smartphone story with more Chinese brands entering and making it difficult to compete even in that segment.”

Introduction of affordable TVs by various brands has been another major factor leading the growth. There are 32-inch LED TVs available in the market at prices starting below Rs 10,000. A TV brand that goes by the name of Detel had recently introduced India’s most economical TV – Detel D1 at Rs 3,999.

Founder of Detel, Yogesh Bhatia, said, “Penetration in states like Bihar, Jharkhand, UP, Uttrakhand, Madhya Pradesh and Chhattisgarh is the main reason why we introduced world’s most economical TV in India. With this TV, we aim to reach to the remotest parts of the country where TV is still a luxury due to its affordability issue.”

Further, growth of video content industry in national as well as regional languages is making TVs more appealing to many consumers. Many video streaming apps have started providing subtitles in a lot of Indian languages including Tamil, Hindi , Malayalam, Bengali and English.

In fact, there are content service providers in India who are actually creating online show series in local languages. Moreover, internet connectivity services, required to stream online videos, are not only faster (4G), but are also available at affordable costs.

Forecast for TV segment in 2019

The forecast for TV segment in 2019 also look promising. Faisal continued, “2019 will witness demand for bigger and slimmer TVs. We might also see introduction of mic and speaker in TVs. Jio for instance has already showcased TV calling features using ad don camera/mic. This may be embedded by various brands now.”

He referred to smart TV segment as the fasting growing category in the Indian TV industry. Research firm techARC’s prelim estimate figures forecast that smart TVs penetration will increase in the range of 20 to 25 per cent in 2019, when compared to 2018.

However, standalone or conventional TVs will continue to rule the segment. Faisal said, “Despite the large growth figures registered by smart TVs, larger pie will still be with standalone TVs.”

The TV category may also fuel sales of video streaming devices in India. Many of these devices are capable of allowing a conventional TV user access to features that are other wise only available in smart TVs. Such devices are currently available in the price range starting from Rs 800 and going till Rs 5,000 in the country.

Rural India may emerge as a key market

Rural India is expected to emerge as a key market for the TV industry in India. Most of the tier-1 and tier-2 cities have been penetrated already. However, rural India, is one the markets that is not only huge in potential, but is also untapped at the moment.

Faisal said, “The brands focusing on the affordability will devote a lot of energy and resources in tapping rural opportunities. Rural India is definitely going to be a key market in 2019.”

Interestingly, Xiaomi had recently announced opening of 500 Mi Stores in rural Indian markets. Syinix, another China based brand, owned by Transsion Holdings, had unveiled its plans of launching entire range of appliances and consumer appliances in the rural markets. It had said that its testing phase in villages of Rajasthan and Uttar Pradesh saw good response for 32 inch LED TVs.

Speaking about LED TV brands in the country, Faisal said, “I expect to see more brands entering in the LED TV space. The focus would be more on bringing the product in the entry to mid level of markets.  I would expect the government to put in a real serious effort in TVs at least, where volumes might not be as high as smartphones. But, local content + manufacturing could make some differentiation in the market. This is the segment, which in my opinion, is manageable as India is still in its infancy stage in terms of electronics manufacturing.”

Croma Witnesses Increase in its Private Labels in last 3 years