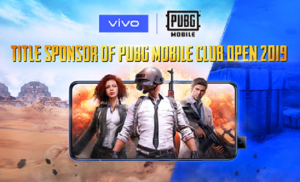 BBK owned Oppo Smartphones has just concluded one of PubG’s online gaming tournaments in India. The idea to associate with one of the most trending online games seems to have suited BBK so well that it has decided to make its another smartphone brand – Vivo, the official smartphone partners for PUBG MOBILE Club Open 2019.

It is to be noted here that BBK now operates a total of six smartphone brands in the world. These include OnePlus, Oppo, Vivo, Realme and recently announced Iqoo and Reno. Interestingly, Iqoo was announced as a gaming smartphone brand while details of Reno are not out yet.

Vivo’s official statement read, “Vivo will provide the official smartphones for the PUBG MOBILE Club Open 2019, which players from ten regions across the globe will be leveraging to battle their way through the Spring and Fall Split, for the total prize pool of $2.5M USD. This global partnership reinforces Vivo’s commitment to bringing an ultra-smooth gaming experience to connect with consumers through meaningful partnerships.”

BBK seems to be on a sponsorship spree

Vivo, apart from being PubG’s latest sponsor, is also closely linked with many other sports in the world. It is the official sponsor of upcoming Indian Premier League. The brand is also associated with FIFA as the official smartphone partner for the upcoming 2022 football world cup. It is to be noted here that IPL and football world cup are counted among the most celebrated sports tournaments in the world. These tournaments reach millions of TV as well as smartphone screens.

Oppo, another smartphone brand that functions under the umbrella of BBK, is the official sponsor of Indian Cricket team and has rights for its jersey. The company has also recently concluded one of the biggest PubG championships in India. Sources claim that it has also booked advertisement slots with Star Network for the upcoming IPL season in India.

“We are excited to partner with Vivo, as they have a strong reputation in being innovative and putting the consumer’s needs first. As an innovative brand ourselves, this partnership highlights our dedication to bring the best experience possible to our players and fans around the world. This partnership is just the beginning, we want to continue building a strong portfolio of partnerships with industry-leading companies, such as Vivo, to provide the best mobile gaming experience possible,” said Vincent Wang, General Manager of Global Publishing Department, Tencent Games.

Xiaomi Adds 20 New Distributors to its Offline Channel in India