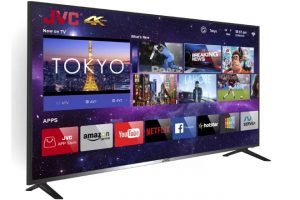 JVC, in association with India based Veira Group has entered the smart TV market in the country. The company has also announced the launch of six new smart TVs at a starting price of Rs 16,990. The JVC product suite includes 4K Ultra HD intelligent smart TVs and full HD smart LED TVs available in four screen sizes – 40-inch, 43-inch, 49-inch and 55-inch. JVC said that it is also planning to invest over 50 crores on marketing, and on setting up service infrastructure for the brand.

Sharan Maini, Director, Business Development at JVC India, said, “With the series of our JVC Smart TVs, we are all geared up to focus aggressively towards the Indian Markets. The need and hunger for content in the Smart TVs is increasing day by day and we assure our customers of providing the largest app base as well as inbuilt content in today’s times in these smart TVs.”

The company has also announced it association with Flipkart e-commerce portal in the country. It is aiming to capture 10 per cent market share in India.

It continued, “JVC Global also plans to invest in building up the smart TV market in India with direct investments with application developers to add multiple contents.”

J Goldberg, JVC Global, said, “JVC Japan is proud to launch this new range of LED TVs with Veira Group in India in association with Flipkart. India is the fastest growing economy in the world and critical market for all tier one brands. JVC and all associated with the venture wish Flipkart and Viera Group only the best and assure all of their continued support.”

All Smart LED TVs from JVC are equipped with features including quantum backlit technology, miracast support, and more than 500 licensed applications and up to one million hours of content to view.

JVC’s official statement read, “The Smart TVs are powered by the 1.5GHz ARM Cortex A53 Quad Core (64 BIT). UHD Smart TVs are one of a king with 2GB + 16GB RAM and ROM and ultra strong quad core processor.”

The TVs come equipped with dual 10W Box Speakers in 40-inch and 43-inch variants while up to 25W + 25W Sound in 55-inch UHD TV. Connectivity options on the TVs include HDMI, USB Ports and a headphone jack.