The proliferation of unbranded “bhakti boxes” in the unorganised electronics bazaar, has moved the biggest Indian copyright owner of recorded music to compete aggressively even as others jump in to offer an international repertoire 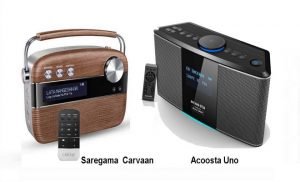 Sometimes, “if you can’t fight ’em, join ’em” can seem like a sensible solution. This seems to have happened in the business of pre-loaded music boxes in India. Consider the situation about 2 years ago:

A creeping phenomenon could be seen all over India in the retail electronics cluster of major cities: the sale of mostly unbranded portable music players pre-loaded with bhakti music: Ganesha aarthis, Sri Ram bhajans, Venkateswara suprabhatham, Hanuman chalisa. They came with a built-in loud speaker, with some 2-3 hours of tracks ( all lifted from popular Music CDs) recorded on an SD or micro SD card sealed inside the unit.

Such bhakthi boxes cost anywhere from Rs 300 to Rs 2000, depending on how many audio tracks they offered. They sold in large numbers and trickled through retailers to neighborhood shops, even kiosks, especially around places of worship all over India. In lakhs of middle class homes, such boxes were switched on at dawn to give families a spiritual uplift for the day. No questions asked or answered about royalties and copyright.

The proliferation of such unbranded “bhakti boxes” in the unorganised electronics bazaar, has moved the biggest Indian copyright owner of recorded music to compete aggressively even as others jump in to offer an international repertoire. EFY-ACE investigates

The entry of RPG

RPG group-owned, Saregama, inheritors of the HMV/EMI label and arguably the largest copyright owners of Indian music in the country, took almost a year to react to this trend. Their response was to fight fire with fire: In late 2017, they launched their own pre-loaded digital audio player named Carvaan. Carvaan is a decidedly retro-designed device that looks like a 1970s “two in one”.

Into the player Saregama crammed some 5000 Hindi songs from the Golden Age of “Binaca Geet Mala”, complete with Ameen Sayani’s matchless commentary, and classified by artiste and theme. One could also plug in a USB stick of one’s own music. At Rs 6,390 it was much pricier than the unbranded competitors and offered a quite different repertoire.

It was slow to take off, till RPG cannily changed its positioning. The imagery with the initial launch suggested that young people and families would enjoy Carvaan. They were wrong. Many of the targeted buyers, millennials, were born into the post-Radio Ceylon-Binaca Geet Mala era. They had no nostalgia for gathering around the radio at 8 pm, every Wednesday. But their parents had. So Carvaan marketing was swiftly changed to suggest that the product made a great gift for one’s parents. The product took off!

A premium model of Carvaan priced Rs 7,390, added an app which allowed owners to search for and play a particular track, setting right a drawback in the first version which was more like a juke box.

Then RPG discovered another fact of musical life in India (what took them so long?) Especially for the golden oldies among customers, musical taste was very localized. Not every one liked Hindi cinema songs..but they wanted their own music: Bengali, Tamil, Punjabi. This led RPG to roll out a whole series of language or genre-specific mini Carvaan players, priced at Rs 2,490, each with some 350-400 tracks: Gurbani, Telugu, Hindi, MS Subbalakshmi, or just plain bhakti.

The device trend had come full circle and ironically RPG was offering players with only devotional songs, taking the pirate manufacturers at their original game, and with aggressive pricing. Sales zoomed. In some 15 months, over 10 lakh Caravaans were sold, accounting for some 40 percent of Saregama’s total business, with outlets in over 20 metros adding to online direct and e-commerce sales.

Meanwhile, what about those customers whose musical tastes extended to other genres of music from contemporary Indipop to bhajans and ghazals; and beyond Indian to international pop and country/western, from rock to reggae?

The repertoire ranges from Sunidhi Chauhaan and Sonu Nigam to Jagjit Singh and Justin Timberlake, Eric Clapton and Pink Floyd to Shakira and Lata Mangeshkar, all the tracks are sourced from Sony Digital Audio Disk Corporation which means they are especially the western tracks. Initially selling for Rs 12,000, Acoosta Uno is now available for Rs 8650 at Amazon portal, another instance of aggressive marketing. It might be rated as good value especially as the player is Bluetooth-enabled to sync another music player or phone and come with a free Karaoke mike.

Desi or global, pop or classical, pre-loaded music players have created a new disruptive niche in India and the segment will soon see further variants. Saregama is set to launch CarvaanGo, a phone-sized pre-loaded device with Bluetooth connectivity and earphones. And will we see international take-offs with similar packet-sized form factors? Too early to tell. But one thing is clear: what started as a very Indian urge to wake up to devotional music has morphed into a new class of players which come with their own inbuilt music and say: Meri Awaaz suno.