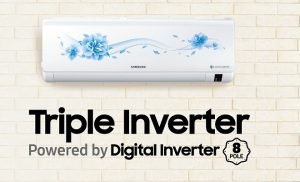 Samsung India has announced the launch of its 2019 line-up of air-conditioners (ACs) in India. The company claims that the cooling capacity of these ACs can be adjusted in accordance to the number of people present in a room.

Company’s official statement read, “These new ACs with triple inverter technology have been designed carefully keeping in mind the consumers’ needs and expectations, which are faster cooling, less electricity consumption and uncompromised cooling even in hot summers of upto 54 degree Celsius.”

Ankur Kapoor, Deputy General Manager, Consumer Electronics Business, Samsung India, said, “Energy efficiency is one of the primary parameters for consumers while making purchasing decisions for air conditioners. Our latest offering with cutting-edge triple-inverter technology and best Warranty proposition makes us one of the most energy efficient and durable brands in the industry.”

It is to be noted here that Samsung does not enjoy  a good market share in AC segment, as it does in the smartphone vertical. The rise of several local as well as international AC companies in the past has created severe competition for the Korea based company in India.

Announcement of offers and schemes to woo customers?

Samsung has announced a two year warranty on PCB (Printed Circuit Board) Controller and five years free gas recharge on its 2019 range of ACs. The Compressor and Durafin Condenser, as announced by Samsung, come with a 10 year and 5 year warranty, respectively.

It added, “To drive affordability Samsung has also introduced attractive finance offers like zero down payment and long tenure EMIs, which gives the users an opportunity to upgrade to energy efficient air conditioners with multiple value propositions.”

Kapoor said, “Besides cooling comfort with optimum energy efficiency, the consumers will also enjoy offers like unlimited gas recharge free of cost for five years; 2 year warranty on PCB and reduced cost of installation among others.”

The triple inverter technology, as per the company, is powered by advanced digital inverter 8-Pole motor, which ensures more energy efficiency and even lesser electricity consumption. Samsung’s has equipped these with anti- corrosion durafin condensers.

Samsung has introduced convertible mode in its 2019 line-up of ACs. The mode which when activated, as per Samsung, allows consumers to save energy when they are sitting alone in a room by using less compressor capacity. It simply means that a 2Tonne AC can be converted into lesser capacity ACs.

Panasonic Launches Icon Series of ACs in India, Ties Up With...